The loss and fragmentation of natural habitat is among the most important pressures currently on wildlife populations. More often than not the populations’ isolation has a negative impact on their growth. One reason for this can be inbreeding effects. Thus, an important management question in modern wildlife management could be: Can we establish a rule of thumb for the minimal genetic exchange (via migrating individuals) to counteract and prevent such effects?

Mills and Allendorf (1996) have mathematically derived a rather simple answer to this question: one migrant per generation. Several assumptions and simplifications underlie their derivation, but still, the rule has proven to be quite robust. For example, Newman and Tallmon’s (2001) investigated and successfully confirmed this rule through experiments on Brassica rapa ssp. campestris.

This kind of simple mathematically derived rule of thumb can be very useful when only scarce data or no data are available on a population. Of course, rules of thumb should not detain from deriving population specific approaches, given available genetic and ecological data.

What about the ecological side? How well do isolated populations grow? Can a minimal connectivity and/or a minimal habitat size be calculated in order for these populations to be viable? 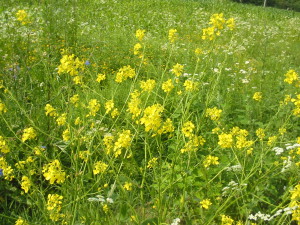