New species on the rise

We are writing in the year 1905. A prince from Bohemia returns from an expedition to North America with a few living male and female examples of their exotic fauna: Ondatra zibethicus ssp., commonly known as the muskrat. The animals were brought to settle in Bohemia and call the prince’s manor their new home, at least according to the prince’s wish.

Time passes, and now we write in the year 1912. During this short time, the few founder animals have managed to create a respectable population size … and have successfully populated almost the entirety of Bohemia. Three years later, their descendants reached Eastern Bavaria, and the rest is history (Ulbrich 1930).

In a classical article from 1951, J.G. Skellam published a mathematical model describing population growth in space and time. The approach is standard in physics, and now also in ecological population modeling. In his article, J.G. Skellam tested his developed model using data on the spatio-temporal spread of muskrats in Europe, published in Ulbrich (1930): Despite the restricted number of data points available, an impressive match of theory and data was shown!

In the last decades mathematical temporal and/or spatial models have been developed that take biological and ecological realism even further, provided sufficient detailed data are available to parameterize them.

New – and sometimes invasive – species are on the rise worldwide. Mathematical modeling can help us in looking through, understanding, and creating predictions about these phenomena. 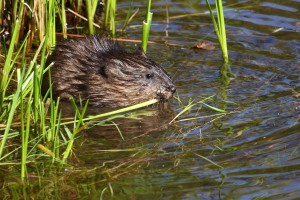